What’s going on in the House of Mouse? A lot, as news from the various divisions of Disney continues to hit Rock Father HQ at a rapid pace. Read on for updates on new Apps from Disney Interactive, the music of FROZEN, some freebies from THE LITTLE MERMAID, updates from Disney Junior and more. 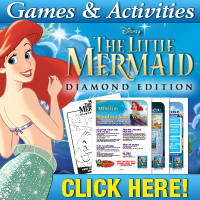 THE LITTLE MERMAID gets some printables…

Continuing the celebration of THE LITTLE MERMAID being released on Blu-ray for the very first time in a “Diamond Edition” (order now from my affiliate, Walmart.com), Disney has issued a collection of games and activities as free printables. Hit this link to download a PDF filled with coloring pages, mazes, and puzzles.

The Music of FROZEN to be released on November 25…

Disney Palace Pets is a FREE iOS App that is available now on the App Store. The enchanted world of Disney Princesses has opened its doors to a new royal bunch – the Palace Pets! The new app features the princesses and their animal companions – from Ariel’s kitten, Treasure, to Rapunzel’s pony, Blondie, and is designed as an interactive storybook that reveals how each princess met her companion.

Jake’s Never Land Shapes and Patterns is a $2.99 iOS App that features three leveled curriculum activities that support shape and pattern identification. Kids can match shapes, complete patterns, and trace their way to treasure – all while Captain Hook is hot on their trail!

La Luna: The Story Project is a $3.99 iOS App that let’s kids join young Bambino as he discovers the magical profession of his pa and grandpa on their midnight sails out to sea.

Based on Disney-Pixar’s Academy Award-nominated short film “La Luna,” La Luna: The Story Project gives an exclusive behind-the-scenes look into how the story was created. Learn how watercolors were used to enhance the film and explore the development process – from storyboard to final animation. You can even watch the short film in its entirety as it was originally released theatrically.

Alice in Wonderland: A New Champion launched as a new game set in a vibrant world inspired by the hit 2010 live-action film, available on iOS and soon on Android devices. Players experience the unbelievable sights and curious mysteries of Wonderland while they fight to thwart the return of the dreaded Red Queen and her minions.

Players tumble through the rabbit hole into this fantastical land and work with the story characters to help rebuild Wonderland and set things right. Along the way, they will solve riddles, craft tools, and assume the mantle as the White Queen’s Champion in order to help Alice save Wonderland from the scourge of the Red Queen.

Disney Interactive recently launched the new DisneyJunior.com as the gateway for preschoolers and parents to access Disney Junior activities and games across all platforms and devices. Designed first for tablets and smartphones, DisneyJunior.com provides a safe and elegant cross-platform experience that’s easy for preschoolers to navigate and built for parents to trust. Using the new kid-friendly interface, children can discover the worlds of Disney Junior’s hit shows, Doc McStuffins, Sofia the First, Jake and the Never Land Pirates and more through mobile and tablet-friendly games, activities and videos. Kids can even tap out a tune with the new xylophone feature!