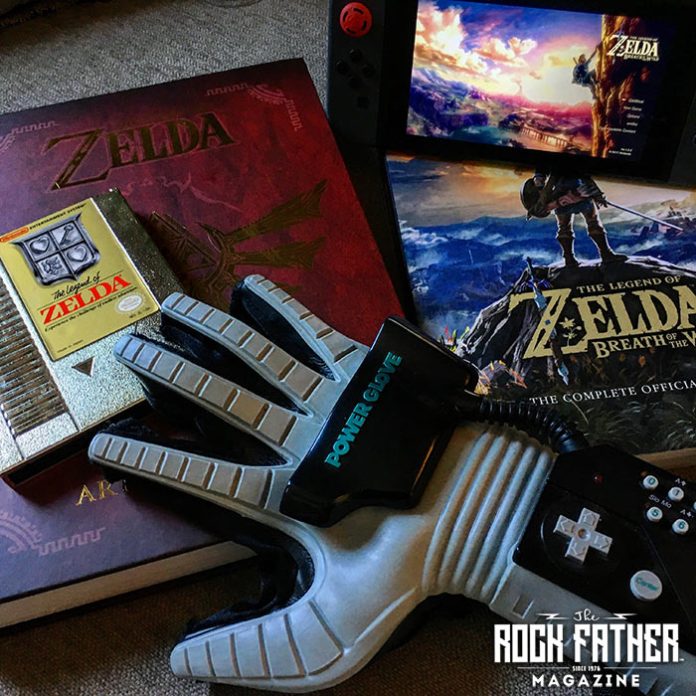 It was 1991 when THE LEGEND OF ZELDA: A LINK TO THE PAST arrived, the third game in the Zelda series, and first for the recently-launched Super Nintendo Entertainment System (SNES). I came into THE LEGEND OF ZELDA a tad late, our family getting the original Nintendo Entertainment System (NES) a few years after it came out, but just at the right time (probably 1988 or so) to be really into the Zelda series by the time that THE SUPER MARIO BROS. SUPER SHOW! started airing in syndication the following year, presenting animated episodes of The Legend of Zelda in place of the Mario Bros. each Friday. The reason I cite the third game in the series as a benchmark is because it was a massive game for Nintendo at the time, helping to usher in the era of a new system, and it has a title that perfectly relates to being a parent: As my kids grow to love THE LEGEND OF ZELDA, it is in fact “a link to the past” – my past.

The recent launch of THE LEGEND OF ZELDA: BREATH OF THE WILD echoes the launch of A LINK TO THE PAST in many ways, it too accompanying the launch of Nintendo’s latest system, the much-acclaimed Switch. It’s also a groundbreaking game, but one well beyond what audiences decades ago could’ve ever imagined – an open-world adventure that retains the core of what made Zelda great (an imaginative story set within the land of Hyrule), while providing countless hours of near-cinematic adventure.

My wife is not particularly a Zelda fan, and her reasoning is simple enough – she just didn’t get into the series as a child, thus she’s stayed hands-off with its modern form (though she is a master as Mario Kart, and thus adores Mario Kart 8 Deluxe). Our girls are another story, though – they’re quite intrigued by BREATH OF THE WILD, even though they’re younger than the intended audience. A key factor is that it’s not their first foray into Hyrule… you see, they’ve already experienced the classics, just like their father before them.

While I have my non-working original NES and some cartridges (including the O.G. Golden Zelda!), last year’s fabled NES Classic Edition was able to throw open that world, with the first two Zelda titles included in all of their 8-bit glory. Beyond that, thanks to Netflix, THE SUPER MARIO BROS. SUPER SHOW! is available for streaming (which I wrote about for the Netflix #StreamTeam a few months back) – right down to the massively dated plugs for upcoming episodes. Since some of the original breaks are intact, we’ve actually had the kids tell us “there’s a new Zelda on Friday!,” not realizing that was only true around 30 years ago – they can watch all of them right now!

As of this writing, our girls are turning five and eight, and by some sheer coincidence, they’ve been able to experience BREATH OF THE WILD on our Nintendo Switch not as something brand-new, but as the next evolution of something familiar… just as I have. It’s been an unexpected bonding point in the video game world, despite the fact that my wife and I still do limit screen time for such endeavors. When it comes to gaming, The Rock Daughters™ are definitely Nintendo girls, and that’s pretty cool. To expand our journey to help Link take down the latest iteration of Gannon, my friends at Nintendo recently send us the Official Guide – something that’s also a real throwback to my days reading Nintendo Power in hopes of finding tricks and tips to games that now seem so simple. They also included THE LEGEND OF ZELDA: ART AND ARTIFACTS, a hardcover book devoted to the artwork of the entire franchise, and it’s beautiful to explore. Fantasy, magic, and mythical creatures inspire much play, and more than 30 years into it, THE LEGEND OF ZELDA is more than just a “video game.” It’s a timeless universe that’s ever-expanding – a tale on-par with great stories from literature and beyond, and something to be passed on from parent to child for generations.

Up next: THE LEGEND OF ZELDA: BREATH OF THE WILD Expansion Pass delivers its first round of DLC on June 30, 2017! Check out the trailer below…