Do you want to be very, very good at being bad? That’s the question posited by Broadway star Kristin Chenoweth as Maleficent in Disney’s DESCENDANTS, throwing down some musical wisdom during a number penned by GRAMMY and TONY-nominated songwriter Andrew Lippa in a film from HIGH SCHOOL MUSICAL director/choreographer Kenny Ortega (read my interview here). It’s long-been said that villains have more fun (and better costumes), a fact I’d back up with names like Cobra Commander, Skeletor, Darth Vader, and maybe even Blofeld (that collar is about the make a comeback)… but what about their kids? Like Doc Brown tells Marty at the ends of BACK TO THE FUTURE, something has to be done about the kids, and that’s where the DESCENDANTS begins. Could the children of Maleficent (SLEEPING BEAUTY), The Evil Queen (SNOW WHITE), Jafar (ALADDIN) and Cruella de Vil (101 DALMATIANS) have a future outside of the family business?

With Belle (Keegan Conor Tracy) and Beast (Dan Payne) ruling over the United States of Auradon (a region created after Beast brought together the neighboring lands), Disney drops their flag into EVER AFTER HIGH territory to claim their rightful throne as the true Kings & Queens of all-things Royal and wicked. At Auradon Prep, we meet the offspring of Mulan (Dianne Doan), Sleeping Beauty (Sarah Jeffery), Cinderella (Jedidiah Goodacre) and Dopey the Dwarf (Zachary Gibson), who study under The Fairy Godmother (Melanie Paxon, who appeared in last year’s Disney production, SAVING MR. BANKS).

With Belle and Beast’s son Ben (Mitchell Hope) about to be crowned King upon his 16th birthday, he declares his first order – to bring the children of the Disney villains to Auradon – starting with a sampling of four, hand-picked from the Isle of the Lost, a sort of Alcatraz visible in the bay across from Auradon. Mal (LIV AND MADDIE’s Dove Cameron), Evie (Sofia Carson), Jay (TWILIGHT’s Booboo Stewart) and Carlos (Cameron Boyce of the just-launched GAMER’S GUIDE TO PRETTY MUCH EVERYTHING) are summoned to Auradon, picked up in a limo that can drive across the magical barrier that keeps the “bad” folks separated from the “good.”

In true Disney form, the youngsters of villainous lineage arrive in Auradon with untrue intentions, and their heroic peers have every intention of changing that. It’s a coming-of-age story and a romantic comedy that’s rife with action and music – but I’m not going to give you all of the ups-and-downs – you’ll have to see that yourself.

From a true musical perspective, it’s easy to see that DESCENDANTS comes from the director of NEWSIES, with the Isle of the Lost striking me as being a little more interesting in its gritty, lived-in form. A little bit of OLIVER!, a dash of STOMP, a pinch of 10 THINGS I HATE ABOUT YOU and some really fantastic production and costume design that manages to stretch the TV budget by tying everything together with color palettes perfectly-keyed toward the familiar characters that these new Descendants call “family,” there’s a lot to love in what I believe just might be the best Disney Channel Original Movie of all-time (it’s certainly my personal favorite). 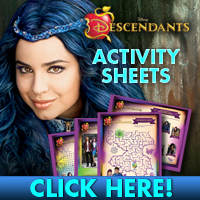 What could the future of Disney’s DESCENDANTS hold? While there’s certainly the very likely feature-length live-action sequels or a TV series waiting in the wings, the residents of Auradon will get animated this Fall in DESCENDANTS: WICKED WORLD, a new series of shorts coming to Disney Channel. But could additional clues to future characters and locales be hidden in plain sight? Skull Island appears quickly on-screen during the first moments of the film, the Map of Auradon (which is even for sale at FatheadFathead) reveals that Auradon is surrounded by water – including The Strait of Ursula, Triton’s Bay and Hook’s Bay, while Sherwood Forest, Rapunzel’s Tower, Neverland and even the Bayou de Orleans appear as charted territories.

It really is a small world after all… but a pretty big one, too.

Disney’s DESCENDANTS is available now on DVD and airs on Disney Channel July 31st, 2015 at 8pm ET/PT. In just one week, the film was viewed over 1 million times on the Watch Disney Channel App.

Catching Up With History’s ‘The Toys That Built America’

The industry fair will be as big as ever, and tackle discussions among trade experts. Read more...

Kids Can Join the Duel with New ‘Yu-Gi-Oh!’ Toy Line

Will the two brothers be able to find common ground? Read more...

Your magical faves with an anime-inspired twist. Read more...

Rounding up the must-see releases from this month. Read more...