Updated September 7, 2014 – After a year-and-a-half on the Windows Phone platform and experiencing problems with devices made by both Nokia and HTC, I can no longer support or recommend the Windows Phone Platform.

1997. That was the year that I became highly desirable to women… wait. Let me start this off a bit differently. 1997 was, according to my wife, the year I “ruled Walmart.” She likened it to the way that “jocks” rule the halls of a high school… the way my friends and I, my crew… ruled a certain Walmart in the South Suburbs of Chicago. She reiterated this tonight when I told her that I was going to be writing a Valentine’s Day-inspired “How We Met”

blog as a part of my affiliation with Microsoft as a member of Team Windows Phone. “You guys were the sh**,” she said.

It might not sound glamorous, but yes, I worked at Walmart. I was a young “Support Manager” running an equally young crew. We weren’t just good at our jobs… we were great at our jobs, and (most) everyone was happy with the work we did. We had a lot of fun, won a bunch of awards, had a great-looking store, and had lots of happy customers. After-hours, many of us still hung out. There were rockstar-style parties, complete with impromptu dips in swimming pools while clad only in underwear, free-flowing booze, many packs of cigarettes smoked, and at least one heavily-damaged BMW owned by a friend and co-worker. On the side, I was occasionally playing in two bands.

I dated a few different girls that worked at Walmart, drawing the attention of the Store Director at one point. We had a sit-down in the “Radio Grill” where I was grilled for playing loose with the “Fraternization” policy… but see, I was within acceptable limits. I wasn’t salaried, and much of what was trying to be pushed upon me was reserved for those one level up. Besides, I didn’t believe (and still don’t) in “Fraternization” limits, because it’s out of line for a Corporation to have control over the people with whom you interact. If I followed someone else’s rules back in ’97, I wouldn’t be The Rock Father today.

I met my wife at Walmart. 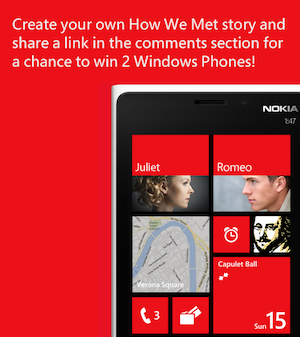 She was working in the Pharmacy (then-run by a third-party), and we’d only spoken a few times in passing. She’d purchased an album by one of my old bands, and we’d chatted about it in the cough/cold aisle at one point. Then, as part of an elaborate set-up, I somehow ended up out one night with her and another Pharmacy girl (whom I’d later find out was also vying for my affection) for mini-golf and some late-night eats. As we grabbed a booth at a local diner, I sat on one side while facing the two girls. Long story short: The following night I was out with my future wife to see AIR FORCE ONE. Less than four months later we were engaged… two years after that we were married… and a decade after that we became parents for the first time (on our Wedding Anniversary!). As of 2013, we’re a family of four. That girl I met at Walmart has now been my life partner for nearly 16 years, and we’ve been married for nearly 14. You can’t put rules in place that limit love. 1997 was the year that set in motion all of the events that led to my becoming The Rock Father.

So here’s the deal: You now know my story, and now I want to know yours. If you tell me a good story, you just may win a pair of Windows Phones!

Head over to Facebook to create your own How We Met story! I’ve created my own using the How We Met App (see mine here). YOU MUST SHARE THE LINK TO YOUR STORY IN THE COMMENTS SECTION BELOW. Want additional entries? Use the Rafflecopter Widget below and simply follow the prompts. Keep in mind, YOU MUST CREATE AND SHARE YOUR HOW WE MET STORY. One lucky reader will win a pair of new Windows Phones (in RED for Valentine’s Day) – a Windows Phone 8X by HTC, and a Nokia Lumia 920!

Fine Print: Promotion open to US residents only, ages 18+. Void Where Prohibited. Phones provided by and to be shipped by Windows Phone – not responsible for lost or misdirected mail. Winner will be chosen on February 14, 2013 (Valentine’s Day!) and will be notified via email sometime after that. If non-response within 48 hours, an alternate winner will be chosen. Good Luck!

For another chance to win a new Windows Phone, click here to take a quick survey!

Content and/or other value provided by my partner, Windows Phone.